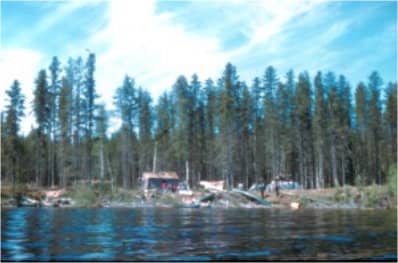 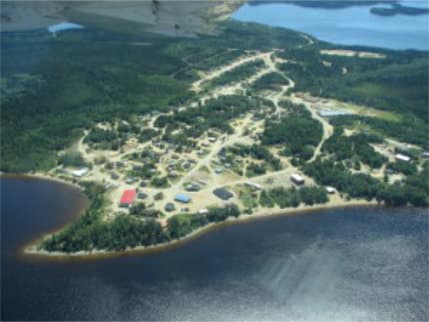 The environment of the Wunnumin Lake First Nation is utilized and preserved by the local native people as their aboriginal homeland; their rights to culture, language, fishing, gathering, hunting, and trapping were granted to them by the Creator. Their relationship with the land is a combination of respect and responsibility. Wunnumin Lake has many historical legends and sights such as the Broken Beaver Dam made by the Big Beaver that lived on the Pipestone River located across the lake from the community. Wunnumin in the language means red clay, this special clay was used by the local natives in the past for paint and patching their birchbark canoes mixed with other vegetation. Legend says that Weesaykajack, who used to roam in the wilderness, used to hunt for food and found the Big Beaver that lived on the Pipestone River and chased the Big Beaver and its Baby Beaver to the this area. When Wessaykajack caught up with the Big Beaver and its Baby Beaver, he killed the Baby Beaver and put it aside in this particular area of the foliage and as the Baby Beaver laid there in this foliage it bled from its wound. The blood seeped into the ground from this Baby Beaver’s wound and this blood made the ground turn into this clay called “Wun-num-mun”. This is how the community of Wunnumin Lake got its name.

Residence of Wunnumin Lake originated from Big Beaver House, a meeting and trading centre, and is still considered a settlement on the map. The main trading post, Hudson’s Bay Company, and most of the community were ravaged by forest fire; therefore, the community was abandoned. Simon Winnepetonga stated the reason for deserting Big Beaver House is that the geographical region was inappropriate for building a community. A decision was made to relocate and two lakes were designated for relocation. The first location was Kingfisher Lake, approximately, 20 miles NE of Big Beaver House and the second area was Wunnumin Lake, (see picture 1 &2) approximately 40 miles east of Big Beaver House. Residents were given the choice to choose which lake to relocate, as a result, two communities were found.

In 1929-30, leaders of Wunnumin Lake First Nation were summoned to Big Trout Lake to participate in the signing of the treaty. Wunnumin Lake was established in the early sixties and is now located at its present location. It also obtained its Indian Reserve status on March 2, 1976.

Wunnumin Lake is located within the Sioux Lookout district and is in the Kenora Rainy River Riding. The community is also in the vicinity of the Pipestone and Winisk Rivers.

Wunnumin Lake First Nation is accessible by air, water and seasonal winter road. Ministry of Transportation began constructing a 3500′ gravel airstrip in 1989 and was completed in September 1992. A daily scheduled flight is provided by Wasaya Airways. Wunnumin Lake may also be reached by waterways of Pipestone River from Pickle Lake, Kingfisher Lake and down to river to Summer Beaver by Winisk River with a number of portages. There is no all-weather highway into the community; however, during the winter season a winter road is constructed for the purpose of delivering bulk material and large volume of fuel between the months of January to March

Wunnumin Lake is divided in two sections of allotted land. The inhabited land consists of 6,835 hectares (22.61 square miles) and the other allotted section contains 3,797 hectares (14.66 square miles) and is located several km east on the south shore of the community.

The community is situated within the Canadian Shield along the northern boreal forest with large variety of wildlife, aquatic life and forest vegetation. Beautiful sandy beaches surround the community and other areas around the lake which provides camp grounds and picnic areas. (see pictures 3 & 4)It is also noted that certain mineral deposits occur within this area.

Wunnumin Lake is within the climate zone of subarctic which is known to have short and cool summers and long cold winters. Various frost and permafrost penetration of the sub-terrain occurs in certain areas. The community is not in the vicinity of wide spread permafrost, in addition, freeze-up occurs in October and break up may start in April or May. The growing season lasts about 120 days.

Picture 3-One of the surrounding beaches and camp area

The native language of the Wunnumin Lake people is a mixture of Cree (Mushkego) and Ojibwe (Anishnawbek). Most of the population can understand, speak and write the English language. The native language is going through a process of evulotion, which is evident between the older and younger generations. There is support for the survival and continuance of the language by providing an immersion program at the school.

The culture and survival of Wunnumin Lake used to be trapping and hunting. From 1980s onwards, there has been a significant decline on the livelihood or dependance on fishing, trapping and hunting. Although, many still pursue fishing and hunting for sustenance. The youth in the community curious about their past have on their own established their own drumming group. Before the arrival of Christainity, the people had their own belief system which included such ceremonies as the shaking tent and sweat lodge. With the help of an elder named Josiah Fiddler, the sweat lodge ceremony has been revived, using ancient Medaywin practices this elder appointed Zack Mamakwa as the sweat lodge keeper for the community of Wunnumin Lake. The ceremony is help people to cleanse their body, mind and spirit.

The current Band membership of Wunnumin Lake First Nation is approximately 630 people living on and off the reserve. Total population on reserve is 573 including the non-registered. This number excludes the non-band members living on the reserve.

The following chart shows the current labour force as of May 2010.

Ontario Works provides welfare to people (member or non-member) residing in Wunnumin Lake. There are regular and sole support cases. The following are charts to display the numbers of members receiving welfare for each month starting January to June 2010.